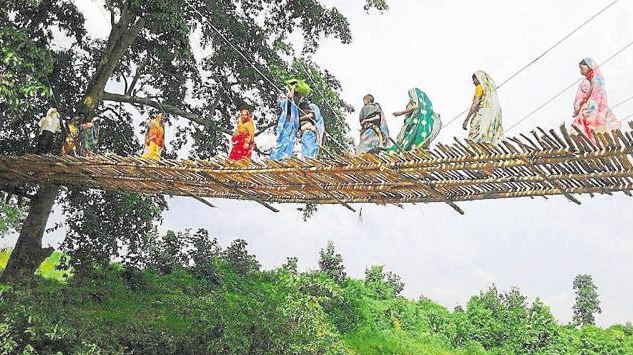 For around 7,000 families living in 15 villages of Adhaura area, crossing one river to civilization had been a pain since Independence.

The government had done nothing for the region, and the area, populated by poor tribal without basic facilities, had been resigned to darkness.

“The villagers met Meira Kumar, who represented the area in Lok Sabha till 2009, but to no avail,” said Ashok Ram, chairman of the construction committee and chief architect.

Fed up with false assurances, the villagers decided to find a way out.

Last year, they came together to fulfill their dream. And last Tuesday, they celebrated the inauguration of the 250-feet long and 10-feet wide bridge near Chainpura over Karmanasa river, built with their own toil and bamboo.

The rope and bamboo bridge was not easy to construct. But today, it stands tied to trees at both ends with a bamboo staircase and a ramp made on either side. At the inauguration, villagers distributed sweets and organised a grand feast.

“Several critical patients and pregnant women have died in the absence of proper treatment. Two youth were swept away by strong currents in 2005 when they were trying to cross the river. However, the administration didn’t come to our rescue,” said Ghurhu Ram, a villager.

1 Response to Bihar tribals build their own bridge, shame government