Posted on February 7, 2016 by jaibiharkarma 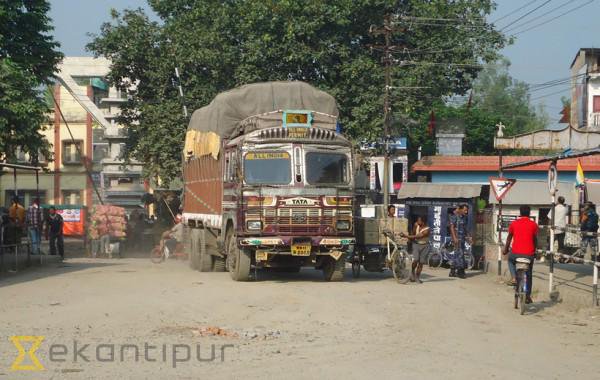 Raxaul: Over 200 trucks from India entered Nepal through Birgunj-Raxaul border crossing on Saturday after angry traders removed tents set up by agitating Madhesis who had enforced a crippling blockade that led to severe shortages in the landlocked nation.

However, tension prevailed on both sides of the Maitry bridge and a large number of police forces have been deployed at the northern side of the bridge in Nepal to avoid any untoward incident.

Sources said more than 100 armed persons came to the border on Friday and set ablaze the tents while some Nepalese locals also extended support to their action by chasing away few protesters sitting near the border area. After the removal of the tents from the border area, vehicles, including some containers entered Nepal. The attackers allegedly beat up the agitating Madhesis, mostly of Indian origin, who have been demanding that the new Constitution be amended to include their concerns.

So far, 58 people have died in the violent Madhesi agitation launched by Nepal’s marginalised groups.

Apart from demanding amendment in Constitution, the Madhesis are also protesting division of their ancestral homeland under the seven-province structure and have led the blockade of key border trade points with India.